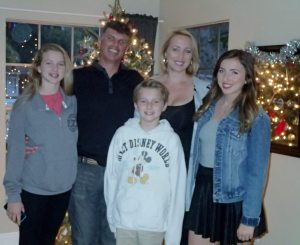 I realize now that I had recently considered myself to be living in a bubble, set to repel all the bad stuff of life. Despite the bumpy beginnings of my childhood, things really have been going well for the last couple of decades. Maybe I thought that I had paid my dues early, and that somehow I deserved the rest of my life to be a little bit charmed. Good health, a strong relationship, a great family, good friends and an enjoyable career all fed my illusion of protection. Then came 2015.

We knew that January would be a challenge.  Our fourteen year old daughter had had a series of orthopedic surgeries, and the big one, the one we had been trying to avoid with the prior surgeries, was scheduled for the first week of the new year. Tom and I propped each other up in the run up to these surgeries, assured each other that we were doing the right thing, walked and talked during the procedures and were each others support throughout her recovery. That January surgery was a tough one.  Two nights in hospital, two weeks in bed, wheelchair for the next two weeks and then six weeks of crutches.  Aoife was in a lot of pain and January took an emotional and financial toll; but it was all for a good cause.

Then came February. My aunt Rita, who had been complaining of back pain for a while, went for tests and was diagnosed with ovarian cancer.  While I planned a summer trip with our three children to spend time with her in Ireland, her health quickly deteriorated, and two weeks after diagnosis she was dead.  An unplanned trip home for two weeks, an unplanned absence from work, an unplanned abandonment of husband and children, and unplanned heartache.  She was one of our favorite people.  We thought that Aoife’s surgery and Rita’s death would be the extent of the year’s challenges.

Then came March.  Tom gets an in depth annual check up at his Fire Department.  His PSA (prostate specific antigen) levels had been rising for a few years and he was referred to a urologist for a prostate biopsy.  Not for a minute did it occur to me that the biopsy would come back anything but clear.  I was wrong, and the test results told us that Tom had prostate cancer. Tom is my bubble – my protection, in a way, and my barometer of rightness – when we are OK, everything is OK.  But Tom wasn’t OK now, and my bubble felt totally popped.

In May, Tom had a radical robotic prostatectomy which totally removed his prostate.  The run up to this surgery was hard. There was a lot of research and reading, and agonizing going on. And of course, none of this stressing and thinking and research was happening in a vacuum; we still had full time jobs, three children, and graduate school to manage. Finally, the tough realization came that the prostatectomy, with all its risks and complications, would be the best way to go.  Other measures might work in the short term, but in the long term we would always be followed by the specter of cancer returning.

The morning of the surgery Tom and I left the house at 5 a.m., the children all sleeping peacefully. We nervously arrived at the hospital and sat in the ironically named, Rapid In and Out Surgical Check In.  Our company was not cheerful. There was an Hispanic woman in her early sixties, tears running down her cheek. A calm looking man in his early seventies with his hand being squeezed tightly by his daughter – he was in for open heart surgery. Mothers and daughters, husbands and wives, and one old man in a wheelchair accompanied only by a hospital orderly.  “See,” I told Tom, “It could be worse”.

Tom’s surgery was scheduled for 7.30 a.m., which would have given us a mercifully short stay in Rapid In and Out, but it got bumped and it wasn’t until about 10 a.m. when we were brought back to pre-op.  As he got into his surgical gown and they attached various monitors and drips to him, I began to feel my stomach quiver. Suddenly, shit was getting real.  Tom’s spirits were kept up by the seemingly never ending train of pre-op nurses who knew him from the Fire Department and his frequent visits to the E.R. transporting patients. The repeated explanations of why he happened to be there as a patient that day, and the, “Oh man, that sucks” commiserations, finally got to me, and a dash to the loo so I could pull myself back together was needed.  But only once.

Finally the time arrived and the surgical nurses wheeled us down the corridor to the O.R.  As our paths diverged and he wheeled to the left, smiling weakly, while I walked on straight to the waiting room, I realized for the first time, that he wasn’t going to be in the waiting room with me, holding my hand through this.  A few friends had offered to sit with me, but I think I refused, believing that this was a Tom and Cathy thing, and that as long as that was the case, I’d be fine.  I hadn’t fully processed that I’d be alone.  That Tom was the patient.  When I got to the waiting room I fell apart a little.

Tom and I started dating when I was seventeen.  I was dating one of his best mates when we first met. Story goes that Tom encouraged that friend to dump me so that the lads could have a summer of unencumbered fun.  Shortly afterwards we started dating. We were together about a year when our families realized the connection.  Tom’s grandparents and my grandparents had lived cady-cornered to each other in a suburb of Cork city.  Tom’s mother was born one day before my father and both our grandmothers used to take them for walks together in their prams. Then we figured out that while our names were Thomas and Catherine, so were Tom’s parents, Thomas and Catherine, and both our paternal grandparents were Thomas and Catherine. Ah, sure, we were pre-ordained! Sitting on the steps of his house on the day that his father was buried, Tom, only twenty then, told me that he was the 16th and last Thomas Tobin in his family, and that should we ever marry I would have to be prepared to bear a son and call him Thomas! It all seemed very pie in the sky to eighteen year old me.

But we did marry, ten years on, and in Florida, where we had emigrated together. And after a Ciara and an Aoife, we produced the required Thomas.  Even through the challenges of a continent switch, small children, career changes and all the other ups and downs of life, we managed to stay best friends. We both agreed that there was no one’s company we enjoyed more than each others’. Next year we will be twenty years married, and thirty years a couple.  I still think he’s the most handsome guy on the planet, and though he annoys the crap out of me on a regular basis, I just couldn’t imagine a life without him. But sitting in the surgical waiting room, that’s exactly what I was doing.  It seemed forever, but finally the surgeon appeared with the news that all had gone was well as it possibly could, that there were no surprises, and he expected Tom would make a full recovery. Hallelujah!

It’s been almost a month since Tom’s surgery.  It hasn’t been easy on him.  It’s a serious operation and its aftermath has a huge impact on his quality of life.  Tom has been amazingly gracious and good humored through it all, but we have caught ourselves at times, wondering at whether the cure was worse than the disease. But then I log on to an online prostate cancer support group and see someone posting about their 43 year old husband who just died. Tom is cancer free and will be 100% in time.

Even then 2015 wasn’t done with us.  In May my mother went into heart failure, in June our daughter’s car broke down, costing $1100 to repair, and less than a week later she went into a 360 degree spin on a highway on-ramp. It has gotten to the point where we just say, “What now?”, and consider Googling ways to remove a hex!

But here’s the paradox of 2015; though all it’s challenges, we have found ourselves counting our blessings even more: Aoife’s orthopedic problems might not have been reparable, Rita could have suffered for months with cancer pain, Tom could have had a much worse or untreatable cancer, mother could have died, the engine might have blown, Ciara could have been killed. Lots of people have it far, far worse.

The glass has been at 50% steadily for the first six months of this year.  How we have viewed it has very much depended on the day.  My illusion of my charmed life has definitely been redefined, but not totally abandoned.  I am grateful to have so much to lose.  But that’s quite enough now, 2015; the lesson has been learned – thank you.