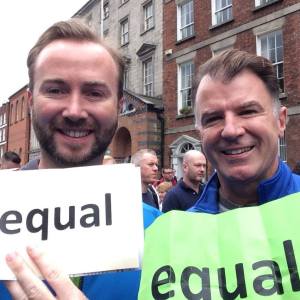 Sometimes, while having pints here in Orlando with English friends, my husband will slap one of the lads on the shoulder and joke, “800 years of oppression – the next round’s yours!”  We have lots of wonderful English friends, who we don’t, of course, hold personally responsible for the 800 years of oppression that the Irish suffered, but that line gets a laugh, and occasionally even, a beer.

We grew up in Cork, at a point in history when most of the indignity and oppression was over with.  It was almost over because many brave souls (family members included) who came before us, stood up and spoke out, and fought hard for their rights. And their day (our day) did come.  Well, mostly; we didn’t get all of Ireland back, but we got 26 counties.

We had our (partial) victory over British rule where many other, much larger, countries failed.  We accomplished this because we couldn’t live under the tyranny of oppression and injustice.  As Irish people, we simply refused to accept that as a condition of our lives. We Irish are fighters for justice and equality. We work to make things even, no matter where we are. When we crossed the ocean to America, we were greeted with “No Irish Need Apply” signs.  Today we make up 10% of the American population.

So, Ireland, I have to ask; is it really a huge surprise that our Irish gay population are standing up and asking for equity in their lives? Is it a stretch to think that they feel they should have the same rights that the rest of their country enjoy, and are fighting for those rights? They are the subjugated now; they are the underdog when it comes to the legal recognition of their relationships. They are gay, but they are also Irish, and  It would be simply un-Irish of them not to stand up and fight for equal treatment.

The Irish, having suffered subjugation first hand, are world renowned champions of the underdog. We have provided the world with peace keeping forces in the Lebanon, Bob Geldof, Bono, and even Mother Teresa (totally inspired by her time in Ireland). We are the country of Concern, Trocaire, and Mary Robinson.  For a small country, we are pretty darn fabulous in our positive effect on the world. The World Giving Index (2014) ranks Ireland as number four in all the world for donating money to charitable causes. We are a generous bunch. So why is there even a thought of not voting yes in the marriage referendum in May? Can’t we be generous with our own?

Don’t tell me that gays and lesbians are different. Don’t tell me that they don’t deserve the same civil rights as the rest of us. Don’t tell me you don’t want to see marriage redefined (ahem, we’ve already redefined that rather seriously, by the way).  Don’t even begin to tell me that you are planning on voting against gay marriage because God isn’t keen on the gays.  In the Bible, God mentions his disapproval of shrimp far more than his disapproval of homosexuality, but should there be an Irish referendum on the sanctity of the prawn cocktail, I think we know what the outcome would be.

So what if the priests tell us gay marriage is wrong?  As a country we have evolved beyond the autocracy of the church – we do have free will, after all.  And even at that, this is a legal matter, not a religious one. But if you have to think religiously, I feel that God will not judge us for being loving, for being inclusive, for being accepting. Seriously, who do you think Jesus would want to be associated with – the people who shun and cast judgement on consenting, loving adults, or the people who say that everyone deserves to be treated equally?  Jesus was known for being a bit of an advocate for the underdog, if I remember correctly (I’m pretty sure he was bit Irish).

And so what if we don’t like the thought of two guys or two girls having sex?  You also probably don’t like the thought of the next door neighbors having sex –but that doesn’t exclude them from the right to the same civil liberties you enjoy.  And please don’t confuse the issue with that of having children. Being “straight married”, being “gay married”, or being unmarried – marriage is not actually a physical condition of parenthood one way or the other.

So let’s just say that 3% of the world’s population is attracted to the same gender.  Are we really happy, as a nation, to declare, by vote, that we don’t think those people should enjoy the same rights we do?  How would you feel if any 3% of the Irish population was told by another authority that they were not entitled to the same rights as the other 97%?  Sorry, no mass or class for you – go find a hedge, and be grateful.  Sorry, not your language – ours.  Does that get your back up?  How about, sorry, no marriage for you – take civil partnership, and be happy with it. Is that OK?   Could you be personally responsible for that?

So my dear Ireland, let’s get it right the first time around here. Our gay brothers and sisters were given their 26 counties in 2010 in the form of civil partnership.  We understand too well the lingering hangover that comes from being granted almost what you want – given partially what you feel is your due.  In this instance, WE have the power.  Let’s get this done all the way for our countrymen – let’s make sure they get their other 6.  We do this by voting yes on gay marriage. Get out and mark your ballot. Equality is our thing. Now it’s our time. May 22nd – say yes.